Backtrack 2 and the Alfa Network AWUS036H 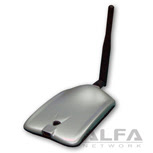 One of the new features of Backtrack 2 is support for the Alfa Network AWUS036H. This 802.11 wireless USB adapter sports power output of 500mW as is based off the Realtek 8187 chipset and uses the corresponding drivers. Some of the highlights of this hardware in addition to its exceptional power levels are its Apple support and ability to be used in Backtrack via virtual machine software such as VMWare 6 (There are many reported issues with using VMWare 5 with this hardware).

If you have this adapter with Backtrack 2 using the default drivers provided with the distribution you have probably noticed lackluster connectivity and reliability. This has been drastically improved with user released modules for Backtrack. These modules not only address the shortcomings of the default drivers but also provide an upgrade path to the latest release of the famed aircrack-ng software including support for aircrack-ptw.

The latest version of these drivers can be found via the Backtrack 2 Community Forums:

Once you have obtained the modules in question the subsequent installation is straightforward and painless. Documentation for the install is provided within the .zip archive. Reading of the above mentioned forum thread is also highly recommended especially if you haven't previously installed modules under Backtrack 2.

Once you have the modules installed you will need to unload the previous ones and load the new ones with using the following syntax:

You should then be able to issue the following commands to bring up the adapter and perform MAC address spoofing (optional):

From here the sky is the limit. Kismet, the aircrack-ng suite, etc should function correctly as well as receiving accurate power levels from the driver. In addition to this connectivty to access points should be possible as well.

One observation that I made was that Backtrack tended to have a kernel panic if the adapter was plugged in at boot time. If you insert the adapter after boot and perform the necessary commands all should be well.

May Your Skill Prevail.